Join us in celebrating an installation service for Rev. Michelle E. Freeman
on
Sunday, June 3 at 3pm

Speaking at the installation service will be
Rev. Dr. Cassandra Gould from Quinn Chapel AME Church of Jefferson City, Missouri 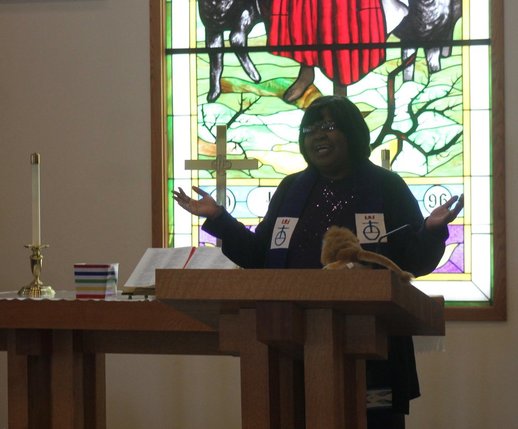 Pastor Michelle celebrated her first worship service with us at Parkside Community United Church of Christ on Sunday, January 14.

​Rev. Michelle Freeman is a native of Austin, Texas and grew up in the Missionary Baptist faith. She is the youngest of four children in her family and enjoyed singing in the youth choir and faithfully participating in youth activities.

Michelle met and fell in love with Georgia Chambers in the Fall of 1994 and they united in covenantal relationship in June of 1996. Georgia and Michelle were both estranged from attending church. Together, in June of 1996, they found the Metropolitan Community Church of Austin, Texas where they both felt a call on their hearts for a future in ministry.  While attending a Christian Retreat in Dickinson, Texas in October of 2004, Michelle said “YES” to God’s call on her life for a future in ordained ministry.

Michelle felt this YES meant she needed to move towards attending Seminary to further explore her call to ministry. Faithful to her call, in August 2008, Michelle was accepted and matriculated at Pacific School of Religion in Berkeley, California. The Dean and Chaplain of the campus introduced Michelle to the United Church of Christ and subsequently Michelle united in membership with First Congregational Church of Oakland UCC in November 2008. In the Summer of 2009, Georgia and Michelle moved to St. Louis, Missouri to continue their studies at Eden Theological Seminary and they both received their Master of Divinity degrees in May 2012.

On July 3, 2015, after the Supreme Court decision to legalize same-sex marriage in all 50 states, Michelle and Georgia legally married in Galveston, Texas. Rev. Michelle Freeman and Rev. Georgia Chambers have been married for 22 years. Rev. Chambers currently resides in Evansville, Indiana where she serves as a Senior Chaplain at St. Vincent’s Medical Center.