The congregation had its beginning before the Civil War as a preaching place in the year 1860.  It was during the Civil War that the Gospel was first preached in Saukville.  The first pastors were ministers of the German Evangelical Lutheran Church (sometimes stated as Wisconsin Lutheran Synod) and preached in the German language.  For a complete list of our Pastors, click here.

In the year 1868 the St. Peter's congregation was organized and founded.  There were seventeen member families at that time.  On October 23, 1875 the congregation was incorporated as Evangelical St. Peter's Congregation.  The Articles of Incorporation were undersigned by three Trustees of the Church:  Louis Ch. Wambold, John Grady, and August Koenig.

St. Peter's officially adopted the new name of the UCC denomination in 1965 when the church's constitution was rewritten.

​In celebration of our 150th anniversary in October of 2018 we changed our name from St. Peter's United Church of Christ to Parkside Community United Church of Christ.  We continue to adapt and grow to the ever changing role of the church in the lives our members and community, and we changed our name to reflect on our mission to be a welcoming church home to the entire Saukville community and beyond.
​ 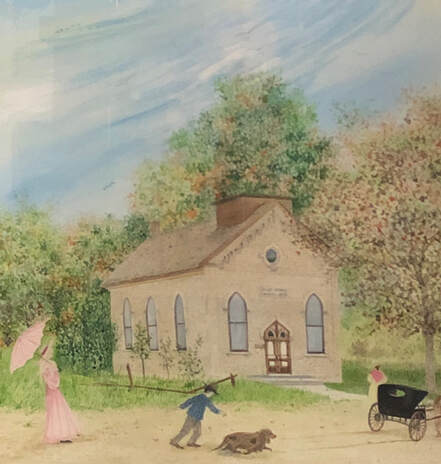 Artist's rendering of what St. Peter's might have looked like in 1876. Credit to the artist, James Milton Smith. The size of original church was 30 ft x 45 ft. If you look closely at the roof, you can see an intentional shadowing of the steeple that was added years after the original building was constructed.

1860      Congregation began church services with the German Evangelical Lutheran services preached in the German language.  Church with the Wisconsin Lutheran Synod.   The first services were held in a Saukville  school house.

1865      The first known pastor was from Friedens Church in Port Washington.

1893.     Friedens confirmed children from Saukville in their church in Port Washington.

1872      Friedens Church joined the German Evangelical Synod of the West, and the Saukville Congregation also joined.

1876      On October 23, 1876, the congregation was incorporated, and the church was built.  It had no bell tower.  Mr. Hubert Niesen was awarded the contract for building the church.  The size of the original church was 30 ft x 45 ft and had no belfry or steeple.  We were known as Evangelical St. Peter’s Church. The articles of incorporation were signed by the three Trustees of the Church: Louis Wambold, John Grady, and August Koenig.

1877      We were affiliated with German Evangelical  Synod of North America.

1888      A bell was purchased from Gardiner Campbell & Sons, and cast by Centennial Bell Foundry of Milwaukee, WI.  The year stamped on the bell is 1888 and the bell has a mouth diameter of 33 inches (Note C) and weight of 600 pounds and a height of 27 inches.

1893      The congregation became self-sustaining from Friedens Church in Port Washington.

1906      An addition was built on the north end of the church to include: a chancel, sacristy, school room, and above that second floor organization room.  A new altar and pulpit were purchased, and art stained glass windows were donated by various families of the congregation.  The dedicated was held on October 14th.

1910    The church interior was painted and redecorated

1915      Another lot was purchased to the east of the parsonage and used as an orchard.

1920      Female members were allowed to sit with male members.  Prior to this, men sat on one side and the ladies sat on the other side of the church.

1926      A rebuilt pipe organ was purchased from the Wangerine Organ Company of Milwaukee.

1928      The church celebrated its 60th Anniversary.  A picture was taken of the congregation in front of the church.  The church was painted and redecorated.

1930      The Young People’s class donated a silver communion tray with the individual glasses.  It is still being used today.

1932      The lady members of the church are allowed to vote on church matters.

1934      Merged and are members of the Evangelical and Reformed denomination.  A beautiful copy of Hoffmann’s “Christ in Gethsemane,” painted by Rev. G. A. Hensel, was donated by him to the congregation to be placed above the altar.  This replaced the “Statue of Jesus.”  This now hangs in the Fireside area of the church.

1937      A copper cross replaced the finial ornament on top of the steeple and was donated by Rev. Hensel.

1938      The church basement was dug out to allow for a Fellowship Hall with kitchen.

1940      Rev. Hensel retired from the ministry and was made Pastor Emeritus.  His residence was one block south of the church.

1941      The Village of Saukville installed water and sewer to the parsonage.  The stained glass windows were retied with angle iron rods, the leads retightened and the frames caulked.

1944      A narrow strip of land between Dries  Street and the church was purchased from Joseph Hackl to be used as a parking area.

1947      The church purchased an 80x115 lot north of the church on Dries Street where the second parsonage (or church house) was built.

1949      An 18 page booklet was printed for the dedication.  The Parish Hall Entrance, the new dining room and kitchen were dedicated on September 11th.  The kitchen was equipped by the Women’s Guild.  Two rest rooms were included.

1952      New Pipe Organ with Deagon Chimes were dedicated.  The organ was built by American Organ Supple Co. of Milwaukee at a cost of $4,200.00.  The pipe organ has two manuals (keyboards) and 377 pipes.  The largest pipe is 16 feet long and the smallest pipe is two inches long.  It has six ranks (set) of pipes. East rank produces a different type of sound such as flute, string, etc.

1953      Youth Fellowship made a $50 donation to the Village of Saukville to initiate a movement to put up street signs in the village.

1954      The Youth Fellowship held their first annual play in the Firemen’s Hall.

1957      Merged and became member of the United Church of Christ Denomination.  The Evangelical & Reformed Church merged with Congregational Christian Church.

1958      On June 29th, a 90th Anniversary Booklet was printed.  A picture was taken on the west side of the church of all who attended.  A Sunday School theme song was written by Evelyn Leach.

1960      St. Peter’s Church purchased the property to the east of the present church grounds bordering Grady Park.  Now the church property, a total of 1.06 acres, extended from Dries Street to Grady Park.  This became part of our parking lot.

1965      The denomination’s name was changed from Evangelical and Reformed, to United Church of Christ.  The Church Constitution was updated.

​1967      The new parsonage north of the church was dedicated by the Rev. Edward Busse, interim pastor. Rev. Sather and family were the first family to move in.

1977      Hosted the World Day of Prayer on Friday March 4th. Eleven churches participated in this celebration.

1987      Printed our first pictorial director which included a picture of all our church members.

1991      John and Elizabeth Feith presented St. Peter’s Church with a proposal to build a new church.

1993      Our congregation is in the midst of a Building and Fund Raising Campaign for a new church building.  This project will include space for the Sunday School area and a new sanctuary.  The old church will become the new Fellowship Hall.  This facility will be equipped to handle various functions with the community.  Groundbreaking is scheduled for spring of 1994.

1995      Outreach held their first rummage sale in Dan and Gail Weigel’s garage.  Nancy Lucas and Mark Gierach had the first wedding in our new church building.

1996      Held the last meeting of the New Building Committee.  Dedication Sunday for the new church building with lunch was held in the Fellowship Hall.  Guided tours were also held.  With the new addition, the entire size of the building was increased to 20,400 square feet.

1997      Printed our third church directory which included pictures of the members of our church.

2001      The Senior Citizens of Saukville are allowed to have their meal site once a week at St. Peter’s Fellowship Hall. Interfaith Caregivers were given an office to use in the lower level. Held our first Annual United Church of Christ Southeast Association Meeting at St. Peter’s Church.

2008      On April 29th had the cornerstone from the old church open.  The following was found: Port Washington newspaper dated July 6, 1876 printed in a German, handwritten letter listing all the members of St. Peter’s Church who attended the meeting dated July 9, 1876, Constitution of the Evangelical Synod of the West, Evangelical Catechism belonging to Rev. Fr. Julius Frank.

2008      On November 2nd St. Peter’s UCC Church celebrated its 140th Anniversary.  Women’s Circle printed their third cookbook.  An eight page anniversary booklet was printed with the help of  James Peterson.    The Peterson brothers collected confirmation pictures and had a display built to display them.  The display has 85 confirmation pictures starting with the year 1910.  From 1910 to the present, we are missing only one confirmation picture.

2014     New flooring installed in the lower level.  A pictorial directory was printed with pictures of church families and church activities.  St. Peter's is involved in the planning of Family Promise of Ozaukee County shelter program for homeless women and children.

2016      The Council appoints a committee to revise the Constitution which is adopted on December 4, 2016.

2017      The Kettle Moraine YMCA began using a portion of the lower level for an after school child care program.  A group of volunteers formed to organize a Brat Fry fundraiser to help the victims of the recent hurricanes.  They raised over $2,000 in funds which were used to assemble 50 cleaning buckets that were distributed by Church World Services to hurricane victims.  The Saukville Community Food Pantry adds a second monthly Free Community meal to be served in the Fellowship Hall.  The members vote to raise funds for a new digital sign for the front lawn.

2017      Rainbow doors were displayed on the front lawn in honor of those killed in the Orlando night club shooting and to reinforce our Open and Affirming welcome.  St. Peter's joined with four other area churches to establish the non-profit organization "Lighthouse Youth Ministry", an ecumenical youth ministry group for the Port Washington/Saukville and surrounding areas.

​2018      Rev. Michelle Freeman called as new 3/4 time Pastor.  Her Installation Service occurred on June 3, 2018.  Pastor Michelle is the first female and the first African American in this role at our church.

2018      A new digital sign was purchased and installed on the front lawn of the church to advertise events and church news.

2018     On October 28, the church celebrates it's 150th anniversary with a special worship service followed by a luncheon.

​2019     Parkside rents out the commercial kitchen to That Taco Guy food truck and begins to rent space with a ministry of St. John's XXIII Catholic Church, A Place to Be Spirituality Center.

2019     An Eagle Scout donated his time to build a Labyrinth in the backyard of the church house.  This Labyrinth will be open to all as a place of reflection.

2020     Began search for 1/2 time Pastor as due to declining funds the congregation voted that the pastoral position had to be reduced to a 1/2 position and Pastor Michelle declined the position on a 1/2 time basis.

2020     On July 1, 2020 Rev. Susan Drake became the official Pastor of Parkside Community UCC, filling the role with a part-time position.

2020      In March, the COVID-19 pandemic has swept across our world, causing us to hold our first virtual services.  We intermittently gather in-person and virtually depending how hard our area is being affected by the virus at any given time.